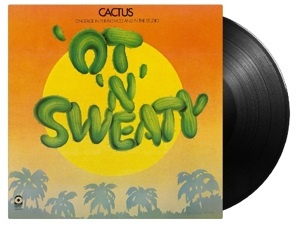 The American rock band Cactus released their fourth album 'Ot 'N' Sweaty in 1972. This was the band's final album before their long hiatus that lasted until 2006. The album is partially recorded live and other tracks are recorded in the studio. New singer Peter French shows his typical rock ‘n’ roll voice and keeps the album going. The boogie rock and live group jams denounce a commonly shared group vision. The interplay on the live “Bad Mother Boogie” is incredible and one of the top songs on this album. It’s an honorable swan song which dignifies the band.

Conceived in late 1969 by former Vanilla Fudge members bassist Tim Bogert and drummer Carmine Appice, Cactus released four albums. These four albums made it to the US Top 200, but the band was mainly active in the underground circuit of the hard rock. The reunited a couple of times and since 2005 they’re recording new albums and playing live gigs.