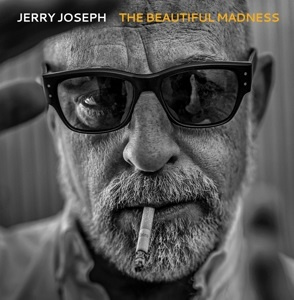 Who the hell is Jerry Joseph? Well Patterson Hood and Jason Isbell think he is one of the best songwriters and performers ever, so much so they backed him up on his newest album. While he has been flying just under the radar in the US he is unknown in Europe and that is all about to change.

This is his first ever European release and will be three months ahead of the US release. Not only are Drive By Truckers the backing band on his upcoming tour but they also recorded the entire new album with Jerry as his backing band. Jason Isbell features on one of the key tracks 'Dead Confederate' and Patterson Hood also produced the entire record.

While Jerry is a legend in the US he has never had a British release after playing for over 30 years - with the Truckers supporting him on many of his early shows having. Woody Harrelson is a long time fan whom followed Jerry on tour in his early days - with the pair even writing together. Jerry has toured the world playing in Japan, Australia, SE Asia, Latin and South America etc while remaining largely off the radar in the UK. His first major dates were supporting Richmond Fontaine on their farewell tour and now he returns for a European tour.

This record was recorded at Matt Patton's studio, Dial Back Sound, in Water Valley, Mississippi with all the Truckers taking part. It is Jerry's strongest ever songwriting and written over a period of years while travelling the world, while Jerry also ran guitar school charities for children in the war zones of Iraq, Syria etc (a project which was recently covered by Rolling Stone US and France). His live shows are a force to be reckoned with, and he will be touring into 2021 throughout Europe.