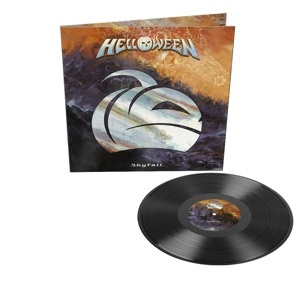 Flatten the runway with a loud drumbeat the spectacular single SKYFALL will be released. The 12 minute epos, written by Kai Hansen has the long yearned ‚Keeper-Vibe’ but it isn’t telling the story of the whole album. SKYFALL has a musical arch which will be loved by fans of every era: from unforgettable times to glorious adventures all the way to the upcoming first album of the HELLOWEEN new age. The epic track tells about an alien landing on earth and a dramatic chase while Hansen, Kiske and Deris duel with each other in a breathtaking manner and create a broadband adventure. SKYFALL will be released in two versions: A-side with the 7 minute single edit and the B-side explodes with a 12 minute alternative version of the album track with a new mix and a different singer allocation. Available only on this very single. The second edition will offer „Indestructible“ as their B-side, another precursor from the album and limited availability with a premium package format.