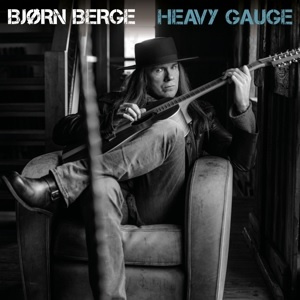 Bjorn Berge is the Norwegian guitarist / vocalist / blues-artist who, probably more often than others, dares to follow his own paths in order to find his personal musical medium of expression. Since he won the Best Musician Of The Year-award in 1999 for his album “Blues Hit Me” (1998), the indicator has pointed in but one direction – upwards. The proof of this is his two Norwegian Grammy Awards (Spellemannprisen) which he received for “Stringmachine” (2001) and “Illustrated Man” (2002). Bjorn’s uncompromising style and distinctive character find their clearest expression when he really enjoys himself; alone on the stage with his guitars and his ‘stompcase’. He has a voice like gravel and broken glass, and those who have seen this man on stage rate him highly as a musicial phenomenon, a true performer and virtuoso of the twelve-string guitar. With Bjorn Berge the blues seems to have no limits!

After a gap of six years Berge released last year his twelfth studio-album “Who Else?”. He showed that he still wasn’t afraid to mix different genres on an album, and neither is he this time. Through “Heavy Gauge” we’re served again with exquisite guitar playing, ballads, blues and a lot of ‘good time music’. The album consists of nine original songs, six of them with Bjorn solo and three tracks with his band. He was born September 23rd 1968 in the Norwegian westcoast city Sveio, near Haugesund. He started to play guitar around the age of thirteen, and since that time, he has been playing more and more, and has been working as a professional for thirty years now. Since 2014 he is also guitarist in the very popular Norwegian band Vamp. Armed with only his guitars, Berge is a musical highway robber savvy enough to leave the mediocre by the wayside, and only take with him what can enrich his music and performance. His concerts are not always easy to describe, as he combines several genres such as folk, jazz, blues, pop and rock. On stage Bjorn usually performs only his own material, but he also makes his own unique and hefty interpretations and versions of songs from artists such as Red Hot Chili Peppers, Morphine, Joni Mitchell and Motorhead. He plays as if he had fifty sets of arms and twenty pairs of legs, and with an insatiable musical curiosity and appetite which will never allow him to become jaded or stuck in a rut. Berge has still got the rebellion and curiosity of youth in him, restlessness is in his blood. And the devil’s snapping at his heels.