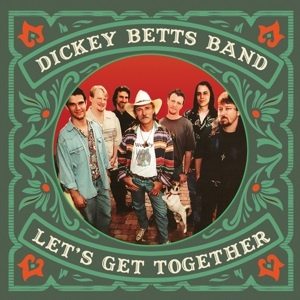 Dickey Betts is an American guitarist, singer, songwriter, and composer best known as a founding member of The Allman Brothers Band.

Betts was the writer and singer on The Allmans' hit single "Ramblin' Man" but is also renowned for composing instrumentals, the most notable being "In Memory of Elizabeth Reed" and "Jessica" (the latter widely known as the theme to the TV show Top Gear). He was inducted with the band into the Rock and Roll Hall of Fame in 1995 and also won a best rock performance Grammy Award with the band for "Jessica" in 1996. Betts was ranked No. 58 on Rolling Stone's 100 Greatest Guitarists of All Time list in 2003. Since leaving the The Allman Brothers he has carved out a successful solo career.

Lets Get Together was originally released in 2001 under the name of The Dickey Betts Band, a solid 6 piece with a similar line up to The Allman Brothers.